Yes, Keisha Lance Bottoms has got that Black Girl Magic working and it has been speaking volumes. Atlanta has got a Mayor named Keisha, Mrs. Keisha Lance Bottoms that is.  Loving the rapidly growing hashtag – #AtlantaGotAMayorNamedKeisha . On today, at 1:00pm, Mrs. Bottoms was officially sworn in and became the sixtieth Mayor of Atlanta, the sixth African American Mayor since Maynard Jackson, Jr., the second female Mayor of Atlanta and the second African American female Mayor of Atlanta.  She has big shoes to fill and a strong legacy to continue as well as make her own. I am loving how she is moving, grooving, carrying the torch and continuing her vision for our Atlanta! 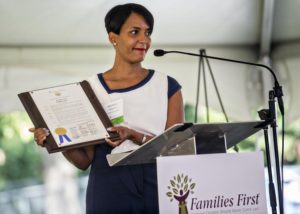 Funny thing is I have never met Mayor Bottoms although we have a lot in common.  We both grew up in Southwest Atlanta, we are very close in age, share an abundance of mutual friends and acquaintances, share an Uncle Joe and Aunt Barbara, she went to Douglass High School with a few cousins and love us some Atlanta. The Atlanta six degrees of separation are really three. (Smile) Trust me she gets nothing but love and support from me.  Madam Mayor I am looking forward to greatness from you! Congratulation my dear.